The headline rate of inflation in the UK fell in March with economists expecting a continuation of this downward trend over the coming months.

Office for National Statistics (ONS) data showed that the Consumer Prices Index (CPI) 12-month rate – which compares prices in the current month with the same period a year earlier – dropped to 1.5% in March, down from the previous month’s figure of 1.7%. This bucked the usual seasonal pattern with prices traditionally rising between February and March; this year was only the second time in over 30 years that this measure of inflation has fallen during this period.

Although the CPI data was collected on 17 March, just prior to the start of lockdown, ONS said that consumer behaviour might already have changed in anticipation of the forthcoming COVID-19 restrictions. As a result, people had already begun to spend less in shops and more on necessities such as food.

A reduction in clothing and footwear prices had the largest downward impact on the March data, with clothing stores offering more discounts, as shoppers began to stay at home. In addition, lower oil prices resulted in cheaper prices at the pump.

Economists are predicting that April’s data will reveal an even greater drop in CPI inflation. This partly reflects Ofgem’s lowering of its utility price cap due to previous declines in wholesale energy prices, as well as weak consumer demand in the face of the lockdown which has forced non-food retailers to cut prices in order to shift stock.

These pressures are expected to continue pushing prices down over the coming months. BoE forecasts suggest the headline rate of inflation is likely to drop below 1% in the spring, while some economists suggest it could sink as low as 0.5% during the second half of 2020.

UK braced for record slump with a bounce back expected

According to survey data the UK economy suffered its largest contraction on record last month, while a Bank of England (BoE) official has warned the pandemic lockdown is pushing the country into the worst slump for centuries.

The latest flash Purchasing Managers’ Index, where any value under 50 represents economic contraction, fell from 36.0 in March to a record low of 12.9 in April. This was much lower than all forecasts in a Reuters poll of economists and also significantly below the 38.1 figure recorded at the depths of the 2008 financial crisis, vividly highlighting the extent of economic damage already inflicted by the pandemic.

This point was further reinforced by Jan Vlieghe, a member of the BoE’s Monetary Policy Committee, who warned that the UK was heading for an unprecedented slump. Commenting on the current health of the economy, Mr Vlieghe said: “It seems that we are experiencing an economic contraction that is faster and deeper than anything we have seen in the past century, or possibly several centuries.”

The BoE policymaker also suggested a slow ‘U-shaped’ recovery increasingly looked more likely than a quick ‘V-shaped’ rebound, although he did offer some hope adding that: “The economy’s potential is severely disrupted at the moment, but once the pandemic is over, and other things equal, in principle it should return approximately to the pre-virus trajectory.” And this prognosis was echoed by the National Institute of Economic and Social Research (NIESR). The think-tank’s latest projections suggest the UK economy will end the year 7.5% smaller than it was at the start of 2020, although a significant bounce back next year is forecast, with growth predicted to hit 6.8%. However, NIESR did admit that uncertainty around the length and severity of the pandemic does make forecasting a difficult task.

At the end of April, several major global markets closed the month in positive territory. On the last trading day of the month, Europe’s largest markets lost most of the healthy gains accrued the previous day, as cautious statements from economists and central banks weighed on sentiment.

In the US, on the last day of the month, the Dow Jones faltered on the opening bell after the latest US jobless claims reading of 3.83 million, took the level to above 30 million since the beginning of the outbreak. The index closed April up 11.08%, with the NASDAQ Composite up 15.45% as Tesla and Facebook helped boost the index.

Gold is currently trading at around $1,688 a troy ounce, a gain of 7.17% on the month. In the third week of April, oil prices dropped into negative territory for the first time as traders started paying to have barrels taken off their hands due to the total collapse in demand caused by the pandemic. The oil price has recovered a little since its recent low, with Brent Crude currently trading at around $26 per barrel, a gain of 0.49% on the month. 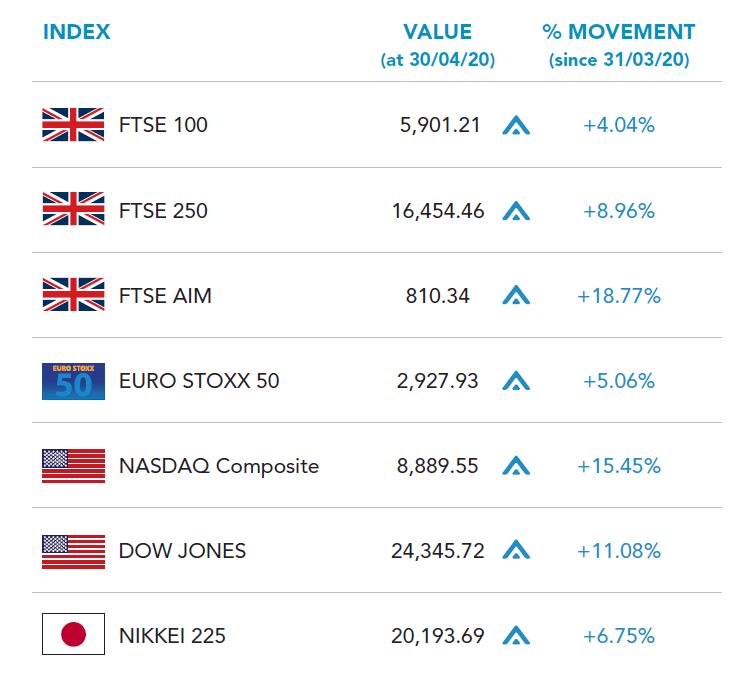 A large increase in benefit claims due to the pandemic lockdown points to an imminent jump in unemployment, with government budget forecasters suggesting the rate could more than double before falling back later in the year.

The latest official employment data released by ONS shows the number of people in paid work rose to a record high in the three months to February, before the effects of COVID-19 hit the economy. However, early estimates for March unsurprisingly highlight a drop in the number of paid employees compared with February’s figures.

Commenting on the data, ONS head of labour market statistics David Freeman said: “Our final data wholly from before the coronavirus restrictions were in place, showed the labour market was very robust. For the first time, we have brought forward information on the number of employees in work using PAYE data to cover a more recent period. These experimental statistics show a softening picture in March.”

A recent surge in benefit claims also suggests the situation has further deteriorated. Indeed, more than 1.5 million new welfare payment claims were made between mid-March and mid-April. While Universal Credit benefits can be claimed by those in work as well as those who have lost their jobs, the figures do point to a sharp jump in unemployment.

Take-up of the government’s Coronavirus Job Retention Scheme, designed to slow any potential rise in unemployment, has been encouraging, with ONS data showing two-thirds of firms have furloughed some of their staff. However, the Office for Budget Responsibility has suggested unemployment could rise as high as 10% if a three-month lockdown is only slowly lifted, although it also said the rate could fall back by the end of the year.

Official data shows that UK retail sales recorded their steepest ever monthly decline, as a sharp rise in food sales due to the lockdown failed to offset a dramatic fall in sales of clothing and most other goods.

With many stores forced to close due to the pandemic, a decline in retail sales was inevitable. Figures released by ONS confirmed this, with sales volumes falling by 5.1% in March, the largest decline since this data series was first introduced in 1996.

Unsurprisingly, however, there was considerable variation across the different sectors. For example, food sales actually rose by a record 10% during the month, while sales of alcohol at off-licences were also up by a record 31%. Other sectors, however, suffered large declines, with clothing sales tumbling by 35%.

The March sales data, which was collected during the period March 1 to April 4, only covered the first two weeks of the lockdown. As a result, April’s data is likely to show a further deterioration with survey evidence pointing to another historic decline.

Indeed, the latest retail sales survey published by the Confederation of British Industry (CBI), which was conducted between 27 March and 15 April, recorded the joint-weakest response in the survey’s history. Commenting on the figures, CBI Chief Economist Rain Newton-Smith said: “It’s no surprise that the lockdown is hitting retailers hard. Two fifths have shut up shop completely for now.”

While there are hopes of a sales bounce back once the restrictions are lifted, the retail sector is likely to remain under intense pressure in the near term. For many store-based retailers, any rebound may come too late, with the likes of Oasis, Warehouse, Debenhams, Laura Ashley and Cath Kidston already having fallen into administration.