The International Monetary Fund (IMF) has warned that economic damage from the Ukraine conflict will contribute to a significant slowdown in the global economy with the UK set to be amongst the hardest hit.

In its latest assessment of world economic prospects, the IMF said the war in Ukraine is driving up fuel and food prices and that this will hit future growth prospects. Global growth is now predicted to slow from an estimated 6.1% last year to 3.6% in both 2022 and 2023, 0.8 and 0.2 percentage points lower, respectively, than the organisation’s previous forecast published in January.

For the UK, the international soothsayer now predicts growth of 3.7% this year, down from January’s 4.7% prediction. In 2023, the UK is forecast to have the slowest growth rate among the G7 advanced economies at just 1.2%, almost half the level of the previous forecast. The IMF said this downgrade reflected elevated inflationary pressures and tighter monetary policy, along with the UK’s ongoing labour supply issues.

Meanwhile, the latest growth figures released by the Office for National Statistics (ONS) revealed a larger than expected slowdown in February, with the UK economy expanding by just 0.1%. This was significantly below January’s figure of 0.8% and lower than the consensus forecast in a Reuters poll of economists which predicted growth of 0.3%. ONS said the slowdown partly reflected a decline in manufacturing, with car production sharply down due to component shortages, and falls in computer goods and chemical products.

Survey data also points to a more recent cooling in the pace of UK output. The preliminary headline reading of the S&P Global/CIPS Composite Purchasing Managers’ Index dropped to a three-month low of 57.6 in April, down from 60.9 in March, as high inflation and the Ukraine conflict weighed on service sector sentiment.

The latest inflation statistics showed that consumer prices in the UK are now rising at their fastest rate in three decades, with further upward pressures in the pipeline.

ONS data released last month revealed that the Consumer Prices Index 12-month rate – which compares prices in the current month with the same period a year earlier – rose to 7% in March. This was above analysts’ expectations and a significant jump compared to the previous month’s rate of 6.2%.

Fuel was the largest single upward contributor to March’s figure, with average petrol prices rising by the biggest monthly amount since records began in 1990. However, ONS also noted that price increases were broad-based with both the food and furniture sectors witnessing notable rises between February and March.

In addition, the latest data does not yet reflect the average consumer’s £700-a-year increase in energy bills following Ofgem’s price cap changes introduced on 1 April. Russia’s invasion of Ukraine is also clearly adding further to current cost pressures, with the price of oil and other commodities continuing to climb higher.

Commenting on the data, CBI Lead Economist Alpesh Paleja said, “The latest rise in inflation will not be the last. We’ll see another jump over April, as the rise in Ofgem’s energy price cap comes into effect. Beyond this, volatility in global commodity prices and ongoing supply chain disruption will continue to stoke price pressures.”

March’s inflation surge has heaped further pressure on Bank of England policymakers, with Bank Governor Andrew Bailey admitting they were walking a “very tight line” between tackling inflation and avoiding recession. The next meeting of the Bank’s Monetary Policy Committee is set to conclude on 5 May, with financial markets expecting it to yield another interest rate hike as policymakers bid to bring inflation back towards their 2% target.

April was a mixed trading month for global stock markets. Corporate reports were influential with a raft of earnings releases in both Europe and the US. The Dow Jones faltered as earnings from several large tech firms failed to impress.

The tech-focused NASDAQ posted its worst monthly loss since 2008. The Dow closed the month down 4.91%, while the NASDAQ finished down 13.26%. Data released toward month end showed the US economy shrank by 1.4% in Q1, with surging inflation, the war in Ukraine and the impact of the Omicron variant weighing.

In the UK, the FTSE 100 closed April up 0.38% on 7,544.55, while the midcap-focused FTSE 250 registered a loss of 2.13%. Stocks most exposed to Britain’s domestic economy have underperformed year-to-date, while the FTSE 100, whose firms earn three quarters of their revenue abroad, with high exposure to buoyant commodities prices, fared better. The AIM registered a loss of 1.93% in April. Toward month end, London markets were supported by gains among the heavyweight commodity stocks, which were buoyed by oil prices. 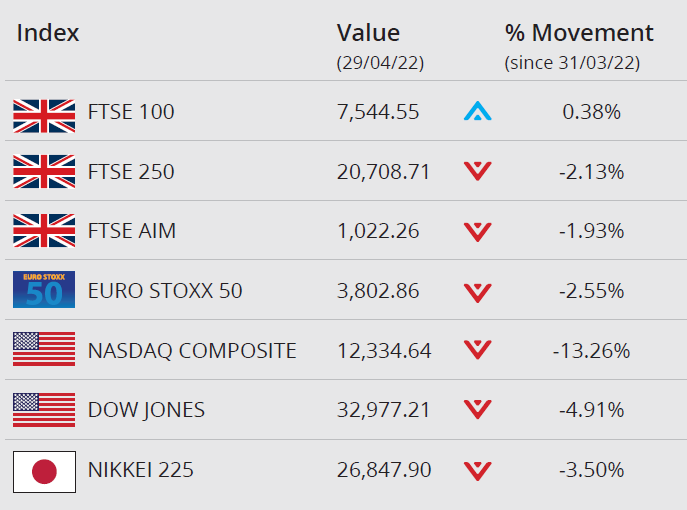 While the latest set of labour market statistics did report further growth in nominal wage levels, the data also showed that basic pay has continued to fall behind the spiralling rate of inflation.

ONS figures released last month showed that average weekly earnings, excluding bonuses, rose at an annual rate of 4.0% across the December – February period. However, although this does represent an increase from 3.8% in the previous three-month period, it also means that regular pay packets actually shrank once adjusted for inflation.

There was better news in terms of unemployment, with the jobless rate dropping further below its pre-pandemic level – in the three months to February, the rate fell by 0.2 percentage points to 3.8%, its joint lowest level in almost 50 years. ONS did, however, say that the fall largely reflected a rise in the number of people who are now no longer working or looking for work and thereby “disengaging from the labour market.”

Official retail sales figures have revealed a sharp decline in sales volumes during March as the cost-of-living crisis pushes UK consumer confidence to a near all-time low.

According to ONS data, total retail sales volumes fell by a greater than expected 1.4% in March while February’s figure was revised down to a 0.5% fall. ONS said both food and petrol sales declined sharply during March, citing the impact of rising prices as a possible explanation, while online sales were hit hard as consumers cut back on non-essential spending.

Survey data released last month also shows that the cost-of-living impact has knocked households’ confidence in the economy and their personal finances. GfK said its headline consumer confidence index fell to -38 in April; this reading was within a whisker of the 50-year-old index’s all-time low, hit during the depths of the global financial crisis in July 2008.

Responding to the latest data, British Retail Consortium Chief Executive Helen Dickinson said, “March sales were impacted by rising concerns around inflation as consumer confidence tumbled. The cost-of-living squeeze has many consumers thinking twice about major purchases, while their expectations of future financial situation plummeted to lows not seen since the financial crisis.”

This is your life – look after it

Only a quarter of Brits have life insurance or critical illness cover policies in place,…

When are you thinking of retiring? With many pre-retirees reassessing their lives and priorities in…

Despite the pandemic, new stats from The Investment Association(IA)1 show investors added over £43bn to…