The latest batch of employment data released by the Office for National Statistics (ONS) shows that the UK labour market remains in robust health, with the total number of people in work rising to another record high.

Statistics from the Labour Force Survey showed that a net 115,000 jobs were created during the second quarter of 2019, taking the overall level of employment to a new high of 32.81 million. As a result, the employment rate (the proportion of 16–64-year-olds in work) rose to 76.1%, the joint-highest figure since comparable records began in 1971. This increase was largely driven by further growth in the proportion of working women.

The data also revealed another increase in the level of pay, with average weekly earnings excluding bonuses rising by an annual rate of 3.9% across the April to June period, an 11-year high. When adjusted for inflation, regular pay increased by 1.9% compared to the same period a year earlier, meaning that real wages are now growing at their fastest rate in nearly four years.

Commenting on the employment figures, ONS Deputy Head of Labour Market Statistics, Matt Hughes said: “Employment continues to increase, with three-quarters of this year’s growth being due to more women working. However, the number of vacancies has been falling for six months, with fewer now than there were this time last year.”

While this strong set of employment statistics does therefore confirm that the UK labour market continues to defy any signs of a Brexit-related slowdown, there are concerns that the figures could prove to be a high-watermark. Demand in the labour market typically lags significantly behind changes in output and economists are still warning that a Brexit effect is likely to become apparent in future sets of employment data.

The latest retail sales figures proved to be stronger than analysts expected, buoyed by the largest rise in online spending for three years.

Official data published by ONS showed that retail sales volumes rose by 0.2% during July, defying the consensus market forecast which had predicted a 0.2% decline. This growth was largely driven by internet sales which recorded a 6.9% jump across the month, the biggest recorded online increase since May 2016.

Across the three months to July as a whole, which smooths out monthly volatility in the data, sales grew by 0.5%. While this shows that consumers have continued to support the economy as the second Brexit deadline looms, the three-monthly increase in sales was the smallest recorded so far this year and ONS described the growth rate as ‘modest’.

July’s rise in retail sales has, however, provided some hope that the economy may return to growth after suffering its first quarterly contraction since 2012 during the second quarter of the year. The hot August Bank Holiday weekend may also have boosted the economy, with a VisitEngland survey suggesting that the record number of Brits holidaying at home over that period could provide a £2.1 billion economic boost.

The latest Distributive Trades Survey conducted by the Confederation of British Industry (CBI), however, suggests conditions on the High Street remain challenging with retailers mindful of the looming Brexit threat. Indeed, the survey found that retailers expect the sharpest deterioration in business conditions since February 2009 during the coming months.

It also pointed to a weakening retail sales picture, with the survey suggesting that sales volumes in the year to August fell at their fastest pace since December 2008. The monthly retail sales balance actually fell to -49, which is the second weakest reading since records began in 1983.

In August, trade tensions between the US and China continued to weigh on sentiment. Statements from President Trump and China’s commerce ministry on 29 August, detailing that the countries were engaged in trade talks, brought some respite to global equities at the end of the month. US equities climbed alongside European and Asian stocks on the final trading day.

Most European indices racked up losses in August barring Switzerland, Denmark and Romania. In the UK, the FTSE 100 fell 5.00% to close at 7,207.18, just shy of having its worst month in four years as sterling’s recovery, trade troubles and a sharp drop in mining stocks, took their toll on the export-heavy index. The decline in FTSE 250 was less marked, the mid-cap index closed August on 19,393.63, a loss of 1.39% over the month. The Junior AIM also finished the month in negative territory, down 6.43%. The Euro Stoxx 50 fell 1.16% to finish on 3,426.78. 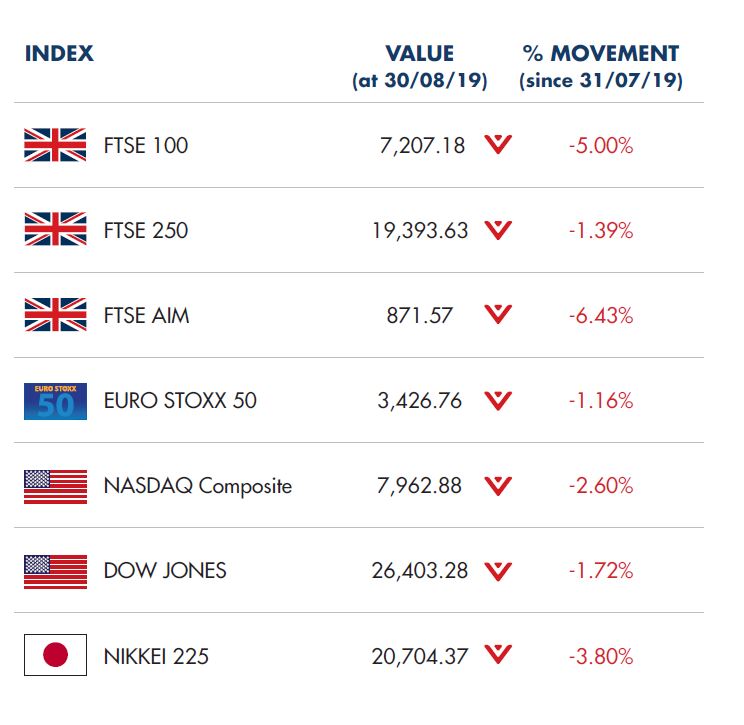 The headline rate of inflation edged above the Bank of England’s (BoE) target last month, amid concerns sterling’s recent decline could exert further pressure on prices.

Data from ONS showed that the Consumer Prices Index 12-month rate – which compares prices in the current month with the same period a year earlier – rose to 2.1% in July. This was up from 2.0% the previous month and higher than the 1.9% consensus figure predicted in a Reuters’ poll of economists.

ONS said the biggest upward contributor to July’s figure came from the recreation and culture sector, with a rise in the cost of computer games and consoles having a particularly large impact. An increase in the price of hotel rooms, as well as less discounting of clothing and footwear this summer also had a significant impact on the overall level of prices.

July’s increase resulted in the inflation rate slightly overshooting the BoE’s 2% target. While government caps on household energy bills may see the rate fall back below target by the end of the year, sterling’s depreciation over the past month has yet to feed through to prices. And some economists have suggested this could result in the cost of living remaining stubbornly high.

Although the latest inflation data will undoubtedly have been noted by policymakers, it may not actually impact too much on the immediate path of interest rates as monetary policy at the moment appears to be inexorably linked to Brexit. Rates were left unchanged for the eleventh month in a row following the last Monetary Policy Committee (MPC) meeting in early August and most analysts expect the BoE to continue its Brexit waiting game when the MPC next convenes on 19 September.

With the second deadline now less than 60 days away, it remains unclear how the Brexit saga is ultimately going to play out, although the chance of a no-deal scenario continues to rise.

While efforts to negotiate a new Brexit deal are continuing, the current position is that the UK will leave the EU on 31 October with or without a ‘divorce’ deal. And the Prime Minister has emphatically demonstrated his determination to achieve this aim by proroguing Parliament for five weeks with MPs effectively being locked out of the House of Commons until 14 October.

Throughout August, however, Mr Johnson did continue to express his desire to achieve a deal. Indeed, following meetings with German Chancellor Angela Merkel and French President Emmanuel Macron before and during the G7 Summit in Biarritz, the Prime Minister stated his encouragement that a deal could yet be reached.

Mr Johnson also recently promised to intensify efforts to secure a deal, with UK Brexit negotiators now set to meet their EU counterparts twice a week in the run-up to a crucial EU summit on 17 October. However, while the EU has said it will listen to any new proposals, the onus has firmly been placed on the UK to find acceptable alternative arrangements, particularly in relation to the controversial Irish backstop.

Although twice-weekly discussions may increase the prospect of a deal being struck, the two sides clearly remain some distance apart on a number of issues and hopes of the talks proving fruitful would appear to remain relatively slim. And, with the parliamentary shutdown seemingly decreasing MPs’ chances of blocking a no-deal Brexit, the odds on the UK leaving the EU on 31 October with no deal have certainly shortened.

The story has progressed at a rapid pace in early September, find out more in our next Economic Review.

EIS and VCT: Risk and reward

The rising popularity of EIS and VCT investments

Since their launch in the mid-1990s, Enterprise Investment Schemes (EIS) and Venture Capital Trusts (VCT)…