The Bank of England (BoE) left interest rates unchanged following the latest meeting of the Monetary Policy Committee (MPC), although two members of the nine-strong committee once again voted for an immediate cut in rates.

At its latest meeting held on 18 December, the MPC voted to maintain its existing monetary policy stance and leave the Bank Rate on hold at 0.75%. However, while seven members adopted this ‘wait-and-see’ approach, for the second month running, two argued that current weakness in the economy warranted an immediate change in policy stance and voted for a rate reduction.

And the minutes of the meeting reflected this viewpoint, stating that the cost of borrowing may need to be reduced if global economic growth fails to recover or Brexit uncertainties persist. They did though also stress that, over the longer term, rates may still need to rise modestly if those economic risks fail to materialise.

Specifically, the minutes said: “If global growth fails to stabilise or if Brexit uncertainties remain entrenched, monetary policy may need to reinforce the expected recovery in UK GDP growth and inflation. Further ahead, provided these risks do not materialise and the economy recovers broadly in line with the MPC’s latest projections, some modest tightening of policy, at a gradual pace and to a limited extent, may be needed to maintain inflation sustainably at the target.”

The final MPC meeting of 2019 was current Governor Mark Carney’s penultimate rate-setting meeting. And the BoE has now announced details of Mr Carney’s successor, with current Financial Conduct Authority chief executive, Andrew Bailey, set to take over at the BoE helm. The veteran regulator and technocrat will begin his eight-year tenure on 16 March tasked with guiding the UK economy into a post-Brexit era.

A sweeping Conservative victory in December’s election has provided Boris Johnson with a large majority that should pave the way for him to drive his vision of Brexit through parliament.

On 12 December, the Tories secured a decisive election victory predominantly due to large swings from Labour to the Conservatives in leave-voting constituencies. This handed Mr Johnson an 80-seat House of Commons majority and a mandate to ‘get Brexit done’ without having to rely on support from Democratic Unionist Party MPs.

Unsurprisingly, Brexit featured heavily in the subsequent Queen’s Speech, which outlined the Prime Minister’s programme for government. Addressing Parliament on 19 December, the Queen said her government’s priority was to deliver Brexit on 31 January, with seven of the 30-plus bills announced relating to Brexit.

The following day, MPs backed Mr Johnson’s EU (Withdrawal Agreement) Bill by 358 votes to 234. The bill now faces further parliamentary scrutiny, with a three-day debate scheduled for 7-9 January, although it is expected to be passed in time to meet the 31 January Brexit deadline.

A number of changes have been introduced to the bill including legally prohibiting the government from extending the transition period beyond the end of December 2020. This means that the UK and EU will have less than 12 months to conclude talks on their future economic relationship and agree a trade deal.

With trade deals typically taking many years to conclude, there is genuine scepticism that a comprehensive deal can be agreed within such a short timeframe. However, while the imposition of a Brexit process guillotine does raise the spectre of ‘no-deal’ next Christmas, some analysts have suggested it may be possible to secure agreement on a ‘bare bones’ deal within that timescale with other aspects then added to it over time.

As the decade drew to a close, leading global markets finished the year in positive territory, with some reaching record highs as trade concerns eased. The finer details of a phase 1 US-China trade deal and Britain’s negotiation of a free trade agreement with the EU are key focuses for investors in Q1 2020. Hopes of concrete progress on the trade front were bolstered between Christmas and the new year, when White House trade adviser Peter Navarro said the US and China looked likely to sign a deal early in 2020.

In the UK, receding concerns around the US-China trade situation, Brexit and the British political landscape, fuelled market gains in December. The Conservative victory in the general election provided investors with clarity over Britain’s likely path for leaving the EU. The FTSE 100 posted monthly gains for the ninth month in 2019, ending the year up 12.1%, the FTSE 250 closed the year up 25%. Wall Street’s main indices were in record-breaking territory after President Trump said that “new trade deals and more” meant that “the best is yet to come“. The Dow ended the year up over 22%. The Nikkei 225 ended the year up 18.2%, meanwhile the Eurostoxx 50 closed 2019 up 24.78%.

Brent crude closed the year trading at around $66.98 a barrel, a monthly gain of 7.31% and an annual gain of around 23%. The catalysts behind the annual rally were the easing trade tensions and the ongoing supply cuts from OPEC (Organization of the Petroleum Exporting Countries) and other major oil producers. Gold is trading at around $1,517 a troy ounce, a gain of 3.65% on the month. The weak dollar helped lift gold to its highest price since September. The metal posted its biggest yearly gain since 2010, rising over 18%. 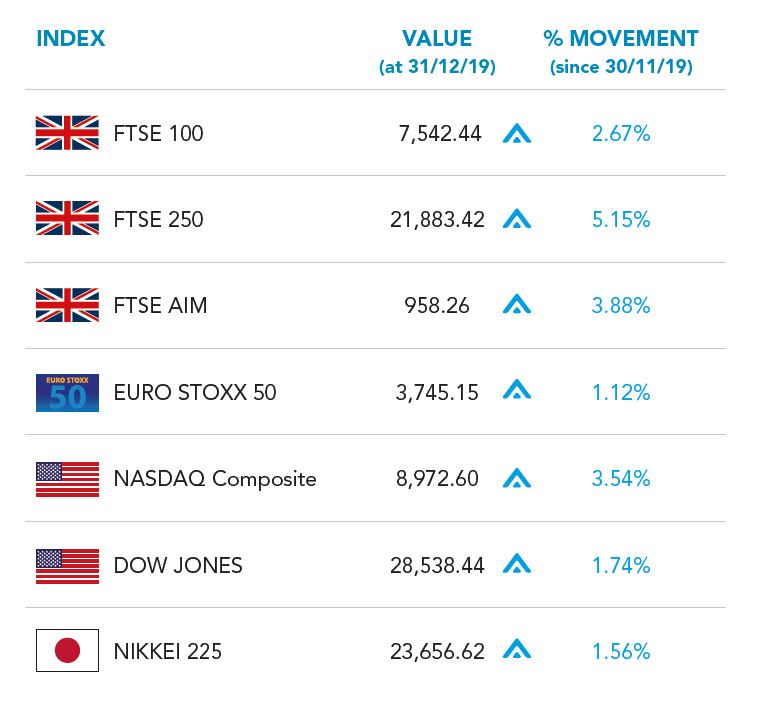 The latest batch of employment data released by the Office for National Statistics (ONS) shows that the UK labour market continues to confound economists with the overall employment rate rising to another record high.

Previously-released statistics had suggested that the economic slowdown had begun to impact on the UK labour market. And the consensus forecast in a Reuters poll of economists was that the latest figures would reveal a drop of around 10,000 in the overall number of people in employment.

However, statistics from the recently-released Labour Force Survey defied these predictions and showed that a net 24,000 jobs were created between August–October 2019. As a result, the employment rate (the proportion of 16–64-year-olds in paid work) rose to 76.2%, the highest figure since comparable records began in 1971.

While the latest statistics do therefore show that the labour market remains in relatively robust health, there are still concerns that the current figures may ultimately prove to be a high-water mark. Indeed, the number of vacancies continues to decline, with an estimated 794,000 recorded in the three months to November 2019, 20,000 fewer than the previous quarter and 59,000 fewer than a year earlier.

Commenting on the figures, ONS head of labour market statistics, David Freeman said: “While the estimate of the employment rate nudged up in the most recent quarter, the longer-term picture has seen it broadly flat over the last few quarters. Vacancies have fallen for 10 months in a row and are now below 800,000 for the first time in over two years.”

Official retail sales figures show that UK consumers have been keeping a tight rein on spending in the face of ongoing political and economic uncertainties.

The latest set of statistics released by ONS revealed that retail sales volumes fell by 0.6% during November with all main sectors, apart from food stores, seeing a drop in sales. This was the fourth month in a row where the data failed to show any monthly growth, the longest such run since at least 1996.

Across the three months to November as a whole, which smooths out monthly volatility, sales decreased by 0.4% when compared with the previous three-month period. The figures also revealed a sharp slowdown in the annualised rate, with year-on-year sales growth of 1.0% in November down from 3.1% in October and the weakest annual rate of growth since April 2018.

The data used for the November statistics was collected during the four-week period from 27 October to 23 November and therefore excluded Black Friday sales promotions which centred on 29 November. Although ONS said it was confident its seasonal adjustment process accounted for this, some analysts have expressed concerns that the timing of Black Friday may, to some extent, have distorted the data.

Indeed, figures released by Barclaycard do suggest that Black Friday was the one relatively bright spot on an otherwise gloomy retail landscape, with sales volumes between 25 November and 2 December up 7.1% in comparison to 2018. However, even if ONS data ultimately reveals a ‘statistical’ rebound in December, retail sales volumes are still unlikely to post any growth across the final quarter of last year. And that would pretty much cap an annus horribilis for the retail sector.

Growth slowest since 2010 Although the UK economy did expand during the third quarter, thereby…