Pay growth strongest in a decade

The latest batch of labour market statistics shows that UK workers’ basic pay is now growing at the fastest rate in nearly 11 years.

According to data from the Labour Force Survey, average weekly earnings, excluding bonuses, rose by an annual rate of 3.6% in the three months to May 2019. This was at the top end of forecasts submitted in a Reuters poll of economists and the largest recorded increase in pay growth since mid-2008.

The data also showed that wages continue to outstrip inflation. Indeed, in real terms, regular pay increased by 1.7% in the March to May period compared with a year earlier; this represents the highest real rate of growth since autumn 2015.

This recent acceleration in wage growth has largely stemmed from two factors that have impacted the data since April. The first relates to pay rises for some NHS staff which has contributed to an overall increase in public sector pay growth to 3.6%, its highest level since June 2010. In addition, the introduction of the new National Living Wage rate and National Minimum Wage rates have boosted wages for lower-paid workers in sectors such as wholesaling, retailing, hotels and restaurants.

Commenting on the figures, Matt Hughes, Deputy Head of Labour Market Statistics at the Office for National Statistics (ONS), said: “The labour market continues to be strong. Regular pay is growing at its fastest for nearly 11 years in cash terms and its quickest for over three years after taking account of inflation.”

This latest pick-up in pay growth will undoubtedly have been noted by policymakers. The Bank of England (BoE) has previously said it expects wage growth to ease back to 3% by the end of this year and these latest figures clearly show wages rising at a rate significantly above that forecast level.

Recently-released figures have revealed that the UK’s sustained period of declining labour productivity continued during early 2019.

The UK has suffered with weak productivity levels since the 2008 global financial crisis. In the 10 years following the financial crisis, productivity stagnated, with the UK witnessing the slowest rate of growth since modern records began. Indeed, analysis of BoE and ONS data suggests it was the least productive decade since the early 1820s, when the country was emerging from the Napoleonic wars.

A number of possible explanations for this poor performance have been suggested, including low growth in investment by companies and a rise in the number of jobs in traditionally less productive sectors. Whatever the reason, however, low productivity presents a clear challenge to policymakers as it poses a serious risk to long-term economic growth prospects and plays a key role in squeezing living standards.

Worryingly, the latest data published by ONS shows that UK labour productivity, as measured by the amount of work produced per working hour, fell by 0.2% in the first quarter of 2019 compared to the same period a year earlier. This was the third consecutive quarter of negative productivity growth, the first time this has happened since 2013.

Head of Productivity at ONS, Katherine Kent, commented: “Our latest figures represent a continuation of the UK’s productivity puzzle. This sustained stagnation in productivity in the last decade is at odds with what we’ve seen after previous economic downturns, when productivity initially fell but subsequently recovered in a relatively sustained fashion.”

ONS also provided an estimate of the impact low productivity has had on wage levels. Its analysis suggests that if productivity had grown in line with its long-term trend average, wages would now be just over £5,000 higher for the average private sector worker.

In the US, the Federal Reserve cut interest rates at the end of the month, the first cut in a decade. Contrary to expectations, the head of the US central bank said the move might not be the start of a lengthy series of cuts to shore up the economy against risks, including global economic weakness. The Dow Jones and NASDAQ closed the month up 0.99% and 2.11% respectively.

Brent crude dropped 0.51% in the month, to close at $64.06 a barrel. This drop came despite a bigger-than-expected decline in inventories in the US and a drop in crude production among OPEC members, along with Libya cutting exports. US output remains well supplied. Gold closed the month up 0.32% on $1,413.71. 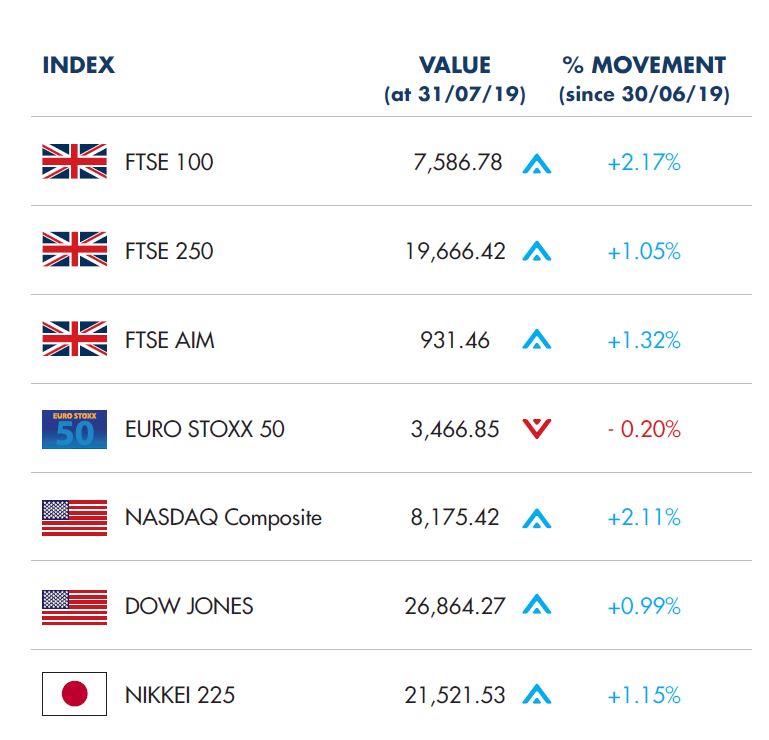 Although the economy returned to growth in May, fears of a slowdown are mounting, with some economists warning that the UK may be on the verge of a recession.

Official gross domestic product (GDP) data released by ONS shows that the UK economy grew by 0.3% in May, compared to the previous month, when Brexit-related shutdowns at car plants resulted in a contraction of 0.4%. However, despite the modest monthly rebound, the latest batch of GDP statistics still suggests that the economy has witnessed a distinct loss of momentum since the start of the year.

Analysts have also warned that June’s growth figures will need to be relatively strong if the UK economy is to avoid an overall contraction across the whole of the second quarter. The June data that has been released in a number of closely watched business surveys from the manufacturing, services and retail sectors suggest this is unlikely to be the case.

Indeed, in its August 2019 review of UK economic prospects, the National Institute of Economic and Social Research (NIESR) suggested that economic growth in the UK has actually stalled. The renowned think-tank also said that chances are now one-in-four that the Brexit crisis has already tipped the country into a technical recession, which is defined as two consecutive quarters of negative growth.

The NIESR assessment also warned that risks to economic growth were heavily skewed to the downside given the increasing chance of a no-deal Brexit and the possibility this could be disorderly. The report concluded: “The outlook beyond October, when the UK is due to leave the European Union, is very murky indeed with the possibility of a severe downturn in the event of a disorderly no-deal Brexit.”

The possibility of a no-deal Brexit has increased significantly over the course of the past month despite further warnings over the potential economic consequences such a situation could incur.

On 23 July, Boris Johnson was officially confirmed as the new leader of the Conservative party and thereby, the country’s new Prime Minister. Although widely expected, the decision has undoubtedly increased the prospect of a no-deal Brexit, with Mr Johnson firmly committed to leaving the EU on 31 October, with or without a deal.

While the new Prime Minister has stressed that he does plan to renegotiate the Brexit deal his predecessor had previously agreed with the EU, time is tight and there is clearly no guarantee any discussions will prove fruitful. And the man Mr Johnson has tasked with preparing the country for a no-deal Brexit, Michael Gove, recently confirmed that the Government is now “working on the assumption” of a no-deal Brexit.

It does, however, remain unclear whether MPs could ultimately frustrate Government plans and effectively block a no-deal Brexit. Indeed, while the chances of no deal have certainly increased, a range of other possible scenarios still appear plausible. These include leaving the EU with a new or amended deal on 31 October; delaying departure; a General Election; a second referendum, and cancellation of Brexit altogether.

The Government’s insistence that it is prepared to leave without a deal did have an immediate economic impact with sterling slipping to a two-year low against the dollar. In addition, warnings have been issued over the likely consequences a no-deal Brexit could have on public finances. In its first assessment of a no-deal scenario, the Office for Budget Responsibility suggested that such an outcome could add £30 billion a year to public borrowing by the 2020/21 fiscal year.