The Bank of England (BoE) has reduced its growth forecast for the UK economy amid growing concerns over global trade tensions and fears of a no-deal Brexit.

In its latest policy statement, the BoE said it now expects economic growth to be flat during the second quarter of this year, a downgrade from the 0.2% quarterly growth rate it predicted in May. This reduction partly reflects an anticipated hangover from the rapid level of stockpiling that was witnessed in the run-up to the original Brexit deadline in March.

However, the BoE also noted a darkening outlook for the world economy and suggested that downside risks to growth have increased. Specifically, an intensification of global trade tensions and growing fears of a no-deal Brexit are major areas of concern. The BoE also highlighted a growing disconnect between the smooth Brexit underpinning its forecast and a potentially much more chaotic one that markets increasingly appear to be predicting.

Meanwhile, the latest economic growth data released by the Office for National Statistics (ONS) shows that the UK economy shrank by 0.4% in April compared to the previous month. This sharp contraction reflects a dramatic decline in car production due to factory shutdowns that had originally been designed to cope with disruption from a March Brexit, as well as a general easing of stockpiling right across the manufacturing sector.

In the three-month period from February to April, economic growth slowed to 0.3% from the 0.5% growth rate recorded in the first quarter of 2019. This was a sharper deceleration than most economists had been predicting and would appear to suggest that underlying growth is sluggish. This has led some economists to suggest that the UK is likely to experience a relatively subdued growth profile over the rest of this year.

The BoE has again left interest rates on hold and reiterated its belief that the monetary policy response to Brexit could ultimately push rates in either direction.

Following its latest meeting on 19 June, the nine-member Monetary Policy Committee (MPC) voted unanimously to maintain its existing monetary policy stance. This marks the tenth consecutive month that the bank rate has remained unchanged since it was increased from 0.5% to 0.75% last August.

The minutes of the meeting, however, continue to read very much like a holding operation; on one hand they stressed the downside economic risks that could necessitate a lowering of rates, whilst also leaving the door open to higher rates should these risks fail to materialise.

Specifically, the minutes stated: “The Committee continues to judge that, were the economy to develop broadly in line with projections that include an assumption of a smooth Brexit, an ongoing tightening of monetary policy over the forecast period, at a gradual pace and to a limited extent, would be appropriate.”

However they also stressed that the economic outlook continues to depend heavily upon the nature and timing of the UK’s EU departure and, in particular, whether the transition is abrupt or smooth. The future path of interest rates therefore appears to remain inexorably linked to Brexit with the minutes adding: “The monetary policy response to Brexit, whatever form it takes, will not be automatic and could be in either direction.”

The MPC’s next meeting is scheduled to take place on 1 August, although the latest inflation figures appear to have eased any immediate pressure to alter policy. When setting rates, the BoE is tasked with keeping inflation within one percentage point either side of a 2% target; and ONS data released last month showed that inflation in May fell to exactly 2%.

Global markets largely closed June in positive territory, capping gains on the best first half for global equities since 1997. Investors grew optimistic of some progress being made in the meeting at the G20 Summit in Osaka, between President Trump and China Premier Xi Jinping. The Summit delivered some good news as the two nations agreed to get trade negotiations moving again. With talks back on track, it will be interesting to see how much progress is made in the coming weeks.

In the US, the final revision of first quarter GDP growth saw the US economy grow at a solid rate of 3.1%, although business investments and consumer spending grew at a slower pace than previous estimates. The Dow Jones and NASDAQ closed the month up 7.19% and 7.42% respectively.

Brent crude gained 4.38% in the month, to close at $64.39 a barrel. Fears about weaker global demand, as a result of the trade spat, added to the challenges faced by the Organisation of the Petroleum Exporting Countries. OPEC look likely to extend oil supply cuts, as Iraq joined Russia and Saudi Arabia in endorsing a policy aimed at supporting the price of crude amid a weakening global economy. The weaker dollar and uncertainty over trade, saw gold recover at the end of the month, after dipping below $1,400 per ounce on 27 June. Gold closed the month up 7.97% on $1,409.25. 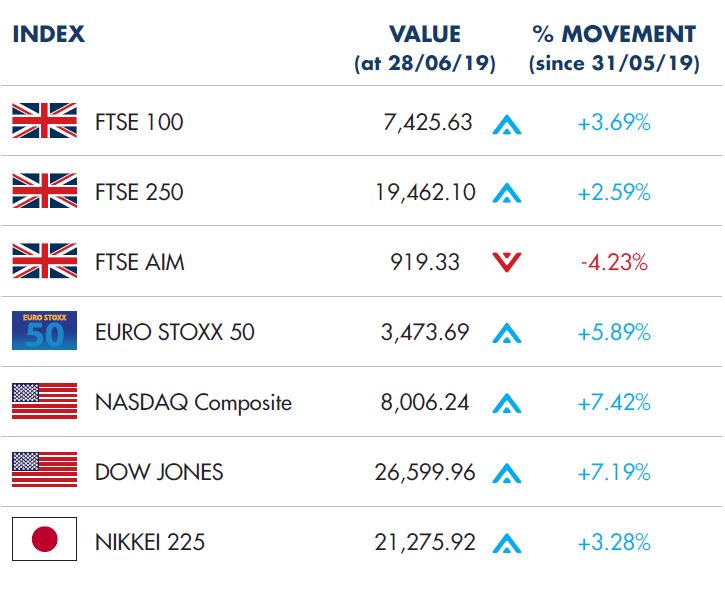 While the Brexit process effectively remains on hold until the Conservative party membership elects the country’s next Prime Minister, further warnings over the potential consequences of a no-deal withdrawal have been issued.

The race to elect the next leader of the Conservative party, and the country, is now in full swing. And, whether it is Jeremy Hunt or Boris Johnson that is ultimately handed the keys to 10 Downing Street on 23 July, will clearly have a major impact upon how Brexit unfolds. However, at the moment the process is effectively in limbo.

The two potential candidates have both set out their Brexit agendas and, while there are some similarities in approach, there are also some significant differences. For example, both men would attempt to renegotiate a deal with the EU and both would be prepared to leave without a deal. However, while Mr Johnson has stated that the UK must leave on 31 October ‘deal or no deal’, Mr Hunt is more flexible suggesting the date is a ‘fake deadline’.

Interestingly, Theresa May has refused to guarantee unconditional support for her successor’s Brexit strategy, whomever and whatever that might be. This reluctance vividly demonstrates the difficulties that the new Prime Minister will undoubtedly face when trying to build a consensus across the House of Commons for any potential new deal that they may be able to negotiate with the EU.

Meanwhile, Japan’s foreign minister, Taro Kono, has strongly urged the two prospective leadership candidates to avoid a no-deal Brexit. The minister said that Japanese firms were ‘very concerned’ about the potential impact on their operations if the UK were to leave the EU without a deal. Mr Kono also stressed that trade talks between the two countries could only take place once the UK had actually left the EU.

The latest batch of retail sales statistics suggests that consumers have become increasingly cautious in recent months adding to concerns over the current state of the UK economy.

Official data published by the ONS revealed that retail sales volumes dropped by 0.5% in May compared to April’s levels. This was the second consecutive monthly fall in spending and the largest reported decline in sales so far this year.

ONS statisticians said the fall was partly due to May’s unseasonably cold weather which had a particularly severe impact on clothing and footwear sales during the month. Indeed, the volume of sales in this sector fell by 4.5% during May, which represents the biggest monthly decline in clothing sales since July 2015. The data also showed that the ongoing decline in spending at department stores continued during May.

There is also evidence that the recent decline in retail sales continued into June, with the latest Distributive Trades Survey conducted by the Confederation of British Industry (CBI) suggesting that sales volumes in the year to June fell at their fastest pace since March 2009. The monthly retail sales balance actually fell to -42 from -27 in May, and this figure was lower than all forecasts collated in a Reuters’ poll of economists.

Some caution does need to be taken with this figure, however, as the survey was comparing current sales with those from a year earlier when the heatwave and England’s unexpected progress in the football World Cup was providing a significant boost to sales. The CBI therefore warned that the sharp fall should be taken with a pinch of salt, although it did stress that the underlying conditions on the high street certainly remain challenging.