Economic Review of May 2020

Official data has revealed that the headline rate of inflation in the UK is now at its lowest level since August 2016, as the economic fallout from the COVID-19 pandemic continues to force price rises down.

Figures released by the Office for National Statistics (ONS) showed that the Consumer Prices Index (CPI) 12-month rate – which compares prices in the current month with the same month a year earlier – dropped to 0.8% in April. This was significantly lower than the previous month’s rate of 1.5% and represented the largest monthly fall in more than a decade.

A key factor behind this easing was a large reduction in petrol and diesel prices, following coronavirus-related weakness in global oil prices. Cheaper clothing and footwear also helped force down April’s overall inflation rate, while previously announced price caps saw a reduction in household utility bills. There was some upward pressure, however, with prices of games and toys, as well as fresh vegetables, rising.

ONS did strike a note of caution with the data, as 92 items in the basket of goods and services used to calculate CPI inflation were not available to price-checkers in April. These ranged from crisps and lemonade, to cinema popcorn, restaurant cups of coffee and haircut prices. As a result, ONS fears inflation readings may be more volatile than usual.

Over the coming months, inflationary pressures are expected to ease further. Indeed, Bank of England (BoE) Deputy Governor Ben Broadbent has said the Bank expects the CPI rate to approach zero during the fourth quarter and even suggested there was a possibility that inflation might turn negative at the turn of the year. Mr Broadbent did, however, insist this would not represent the start of a damaging deflationary period.

Bank of England Governor, Andrew Bailey has warned the UK economy is at risk of taking longer to recover than initially feared, as data begins to reveal the huge impact the pandemic is wreaking across the economy.

The crisis has already inflicted a huge human cost on the country. The government’s imposition of necessary lockdown measures in a bid to halt the spread of the disease has inevitably also had a brutal impact on economic activity.

Release of first quarter gross domestic product (GDP) statistics provided a foretaste of the likely economic damage, with output falling by 2% across the whole January–March period. The data also revealed, however, that the economy contracted by a staggering 5.8% in March alone, the largest ever recorded monthly fall.

The ONS said the impact in late March affected almost every sector and resulted in output dropping by nearly as much in a single month as during the entire 18-month decline associated with the 2008–09 financial crisis. Unsurprisingly, this prompted Chancellor Rishi Sunak to warn that the UK faces a “significant recession.”

BoE forecasts compiled in early May suggested that, under one plausible scenario, the UK economy could contract by a historic 25% in the second quarter and by 14% across the whole of 2020, before bouncing back next year. However, BoE Governor Bailey has since warned that the economy may take longer to recover.

Commenting on the current health of the economy, Bailey said: “The risks are undoubtedly on the downside for a longer and harder recovery. It is also possible that the pace at which activity recovers will be limited by continued caution among households and businesses even as official social distancing measures are relaxed.”

Major benchmarks have rebounded from the lows reached in March as the pandemic tightened its grip. Global markets closed higher at the end of May, despite a tense final day of trading.

On Friday 29 May, there were concerns about the possibility of a rise in tensions between the US and China over recent actions in Hong Kong, where China has moved to impose a national security law, raising concerns over its function as a global finance hub. However, the White House press conference was less confrontational than feared. President Trump said he would take action to eliminate special treatment towards Hong Kong but he did not indicate the US would withdraw from the phase one trade agreement reached with China earlier this year, easing investor concerns momentarily.

In the US, the Dow Jones and NASDAQ each ended May with a second consecutive monthly advance. The blue-chip index was up 4.26% for the month, while the tech orientated NASDAQ returned a 6.76% gain.

Gold is currently trading at around $1,730 a troy ounce, a gain of 2.49% on the month. Towards the end of the month, the price was supported by growing US-China tensions. Brent Crude is currently trading at around $36.00 per barrel, a gain of 36.06% on the month. The oil price has been supported by growing confidence that producers are observing commitments to cut supplies and as fuel demand picks up as restrictions ease. 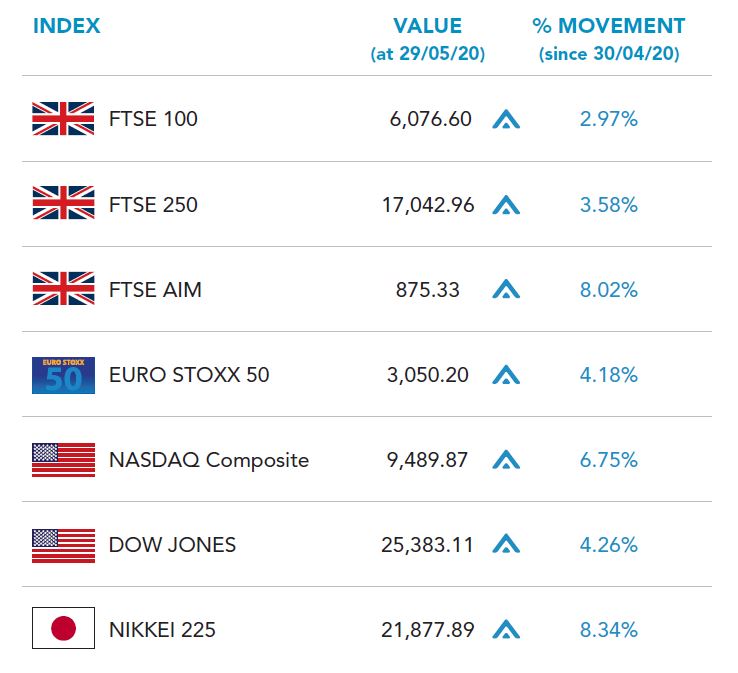 The number of people claiming unemployment benefits in the UK has increased dramatically with the coronavirus-related impact on the labour market set to deepen.

ONS data has revealed that, in April, 856,500 people signed up for Universal Credit or Jobseeker’s Allowance benefits, a 69% increase from the previous month’s figure. This represents the largest ever month-on-month rise and left the total number of claimants at 2.1 million, its highest level in nearly 24 years.

The statistics also showed a significant drop in the number of vacancies and the government admitted that labour market conditions are inevitably set to deteriorate further. Commenting on the data, Secretary of State for Work and Pensions Thérèse Coffey said: “I think we should be prepared for the unemployment rate to increase significantly.”

While the latest raft of labour market data does vividly demonstrate the huge impact the pandemic is having on the jobs market, the figures would clearly have been much worse without the government’s Coronavirus Job Retention Scheme. Indeed, the latest Treasury figures show that 8.4 million employees are currently covered by the state wage subsidy scheme.

Last month, the Chancellor announced an extension of the furlough scheme until the end of October. However, he has also announced that employers will have to start meeting a portion of the scheme’s costs from August. Although it is hard to predict what impact this latter change will have on individual firms’ decisions regarding their employees, it does seem inevitable that some companies may be unable, or unwilling, to retain all of their staff, particularly with little sign of an immediate bounceback in economic activity. As a result, the level of unemployment can only be expected to rise further in the coming months as government support is phased out.

Retail sales decline may be easing

Although UK retail sales fell by a record amount during April and survey evidence suggests they remained depressed in May, there are tentative signs that the rate of decline may be easing.

Perhaps unsurprisingly, the latest set of statistics released by ONS showed that retail sales volumes plummeted in April as many stores were forced to close their doors due to lockdown restrictions. In total, the amount of goods sold during the month fell by 18.1%, the largest decline ever recorded.

Retail conditions were clearly still tough in May, with lockdown measures easing only slightly. Indeed, according to the latest retail sales survey published by the Confederation of British Industry (CBI), the retail sector remained in the doldrums; while its monthly sales gauge did rise to -50 in May, this was only slightly up on April’s historic low reading of -55. CBI Chief Economist Rain Newton-Smith has acknowledged this difficult situation: “The retail sector is at the sharp end of a crisis, with many businesses up against it.”

Even so, the CBI data does imply that sales may have reached their nadir during April. With the Prime Minister announcing a significant easing in lockdown measures from June, it is likely that most shops will be able to reopen their doors by the middle of this month.

What remains unclear though is whether consumers will be prepared to return to shops when their doors do reopen. A YouGov survey, for instance, found that just under half of all respondents would feel uncomfortable returning to clothes shops and this potential reluctance could clearly restrain any potential sales bounce-back. One thing is clear however: the easing of lockdown rules does at least provide a glimmer of hope to the retail sector.