Economic Review of May 2021

The Bank of England (BoE) has significantly increased its 2021 growth forecast, as survey evidence continues to highlight a strong economic rebound, fuelled by the easing of lockdown restrictions and rapid vaccine rollout.

In early May, the BoE revealed its latest predictions for the UK economy, which included a growth forecast of 7.25% for 2021. This was significantly above February’s 5.0% estimate and represents the fastest annual rate of growth in over 70 years. The upgrade largely reflects the successful vaccination rollout, which the BoE believes will boost consumer confidence and pave the way for a mini-spending boom as lockdown restrictions continue to ease.

The Bank’s Governor Andrew Bailey, however, was also keen to strike a relatively cautious note, likening any recovery to “more of a bounce back” than a boom. He added, “Let’s not get carried away. It takes us back by the end of this year to the level of output that we had essentially at the end of 2019. That’s two years passed with no growth in the economy.”

This viewpoint was reinforced in the latest gross domestic product (GDP) figures released by the Office for National Statistics (ONS). While the data did show the economy grew by 2.1% in March, its fastest monthly growth rate since last August, it also revealed the economy remains 8.7% smaller than it was before the pandemic.

Economists did however suggest that the March data marks an economic turning point and more recent survey evidence shows the bounce-back is gathering speed. May’s IHS Markit/CIPS flash composite Purchasing Managers’ Index, for instance, recorded the fastest rate of growth since the index was established in 1998. Commenting on the data, Chief Business Economist at IHS Markit, Chris Williamson, said the UK was enjoying an “unprecedented growth spurt” as lockdown restrictions are lifted.

UK inflation more than doubled in April and prices look set to continue climbing for the rest of this year, although policymakers generally expect such a rise to prove temporary.

Data released by ONS showed the Consumer Prices Index (CPI) 12-month rate – which compares prices in the current month with the same period a year earlier – rose to 1.5% in April, its highest level for over a year. While the figure was only slightly above analysts’ expectations, it did represent a considerable jump from 0.7% in March.

ONS said the sharp rise largely reflected a jump in prices from the weak levels recorded during the depths of the pandemic. Specifically, higher clothing and petrol prices were both significant upward contributors, while gas and electricity prices rose sharply following an increase in the default tariff cap, compared with a cut during the same month last year.

April’s data inevitably heightened concerns of soaring inflation if the global economy recovers strongly during the coming months. However, while the BoE’s latest forecast does suggest inflation will breach its 2% target, rising to 2.5% by the end of 2021, the rate is then expected to fall back to the target level over the following two years.

Policymakers have tended to play down the prospect of central banks being forced to tighten monetary policy soon. Speaking at a University of Oxford event, BoE Monetary Policy Committee member Silvana Tenreyro said, “I expect financial conditions to remain quite accommodative for a few years. I wouldn’t expect to see rates going high, certainly not by historic standards.”

In a similar vein, BoE Governor Andrew Bailey said he did not think the short-term rise in prices foreshadowed longer-term inflation problems, although he did say the Bank “will be watching extremely carefully” and would take action if necessary.

In the UK, business confidence hit a five-year high in May, with the Lloyds Bank Business Barometer showing more firms are upbeat about the economy than at any time since 2016. Confidence increased across all sectors and is the highest in manufacturing, retail, construction and services.

On European markets, the Euro Stoxx gained 1.63% in the month. Economic confidence across the eurozone hit a three-year high at the end of the month, boosted by a jump in sentiment among service sector firms, retailers and consumers, as restrictions begin to ease. In Japan, the Nikkei 225 gained 0.16% in May.

Strong economic data in the US at month end, showed that the jobs market continues to rebound. Investors await further details about President Biden’s $6trn budget plan, set to include large amounts of spending on infrastructure, education and combating climate change. At the end of May, investors brushed off a stronger-than-expected US inflation reading. Federal Reserve officials see rises as temporary and not likely to influence policy. The Dow Jones ended the month up 1.93%, while the tech orientated NASDAQ registered a 1.53% loss. 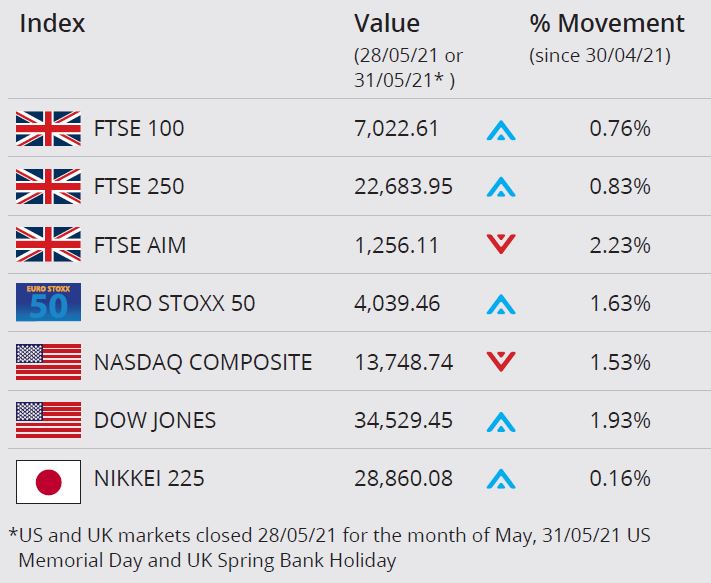 The latest set of labour market statistics revealed a further fall in the rate of unemployment as well as another increase in the total number of job vacancies.
While the most recent data does show there are around three-quarters of a million fewer people on company payrolls than compared with the pre-pandemic peak, ONS said there were ‘early signs of recovery’ in the jobs market.

The unemployment rate, for instance, fell for the third consecutive month, dropping to 4.8% in the January-to-March period, down from 4.9% in the three months to February. While some of this decline was due to a rise in inactivity rates, the data does still highlight signs of resilience and recovery in the labour market.

Perhaps most encouragingly, job vacancies continued to rise and now stand at their highest level since the outset of the pandemic. In the February-to-April period, there were an estimated 657,000 vacancies, an 8.0% increase on the previous quarter.

Furthermore, experimental statistics being trialled by ONS suggest vacancies in April were back near pre-pandemic levels as lockdown easing encouraged employers to recruit. This data echoes recruitment company reports of a rise in job advertisements across most industries, particularly the hospitality sector.

Official retail sales statistics revealed a surge in spending during April as non-essential shops reopened, although survey data suggests demand may have since returned to more normal levels.

According to the latest ONS data, sales volumes jumped by 9.2% in April, compared to the previous month. This sharp rise was twice the average forecast in a Reuters poll of economists and follows on from the 5.1% increase recorded in March. This took April’s overall sales figure more than 10% above pre-pandemic levels.

The main beneficiaries of this surge in sales were clothing retailers, with many consumers apparently taking retail’s reopening as an opportunity to renew their wardrobes. In total, clothing sales soared by almost 70% across the whole of April.

More recent evidence, however, suggests the sales surge may have been short-lived. The Confederation of British Industry’s latest survey, for instance, found that sales in May were broadly average for the time of year, with June expected to be similarly on par. CBI Principal Economist Ben Jones commented, “The fact that sales were in line with seasonal norms is a definite improvement from earlier in the year, but this month’s survey was perhaps a touch disappointing after April’s stronger results.”

Taking back control of your retirement

Consumers lack confidence and understanding about issues relating to their pensions, according to two studies….