Although the UK economy did expand during the third quarter, thereby avoiding recession, growth was weaker than expected with the annual rate of expansion the slowest in almost a decade.

Gross domestic product (GDP) data released by the Office for National Statistics (ONS) showed the economy grew by 0.3% in the third quarter of 2019. While this did mean the UK avoided a second successive quarterly contraction – the technical definition of a recession ¬– the rate of expansion was weaker than both the Bank of England (BoE) and most analysts had predicted.

The positive quarterly growth figure was also driven by a strong performance in July, with the economy actually shrinking in both August and September. Additionally, year-on-year growth in the three months to end-September, slowed to 1.0% from 1.3% in the previous quarter; this represents the lowest annual growth rate since early 2010.

Overall, the figures highlight a distinct lack of momentum as the UK economy entered the fourth quarter. This partly reflects a broad slowdown across the global economy, largely due to the US-China trade dispute, as well as ongoing Brexit-related uncertainties which have hit manufacturing and business investment.

Meanwhile, the BoE has published updated growth forecasts which now include Brexit assumptions based on Boris Johnson’s renegotiated withdrawal agreement. These imply a reduction in the likelihood of no-deal which has thereby created ‘the prospects for a pick-up in growth’, with annual GDP now predicted to rise from around 1% at the end of 2019 to just over 2% by the end of 2022.

However, the BoE also said the transition to a free-trade agreement would introduce new barriers that would raise the administrative costs of doing business with the continent. As a result of this, and a weaker global economy, its updated forecast suggests GDP over the next three years will be 1% lower than August’s projections.

Official statistics show that the rate of inflation in the UK has fallen to its lowest level in nearly three years, principally due to the impact of the energy price cap which has pushed down the cost of electricity and gas.

According to ONS data, the Consumer Prices Index (CPI) 12-month rate – which compares prices in the current month with the same period a year earlier – dropped to 1.5% in October. This was down from 1.7% in the previous month and means that prices are now increasing at their slowest pace since November 2016.

ONS said this easing of inflationary pressures was largely driven by a fall in utility prices due to a lowering of the power regulator’s tariff cap. As a result, gas and electricity prices in October actually fell by 8.7% and 2.2%, respectively, compared to the previous month’s levels.

A decline in motor fuel prices also helped to push down October’s overall rate of inflation. However, the downward pressure exerted by the fuel category was partially offset by a rise in the cost of clothing and footwear, with prices in this group increasing by 1.0% during October.

While the latest figure did come in below the 1.6% consensus forecast in a Reuters poll of economists, price pressures have for some time been expected to ease and are forecast to continue doing so in the coming months. Indeed, BoE projections suggest that CPI inflation will fall to around 1.25% by the spring of 2020 due to the energy price cap and an anticipated reduction in water bills. If this prediction proves correct, then that would clearly leave the inflation rate well below the BoE’s 2% target level.

At the end of November, several major global markets closed in positive territory. However, some indices edged away from previous highs in the month as doubts set in over the outlook for signing a deal to ease US-China trade tensions.

In the UK, at the end of the month, the FTSE 100 fell back from a near four-month high, as trade-sensitive stocks fell on concerns the US ratification of a law backing Hong Kong protesters would hinder progress made in trade talks. Despite downbeat trading on Black Friday, after a poll showed the Conservative Party’s lead over the opposition narrowed ahead of the 12 December election, the mid-caps enjoyed a third straight month of gains (FTSE 250). The blue-chip index also posted monthly gains for the eighth month this year.

In the US, trading volumes were low at month end, with Wall Street working a half-day session after Thanksgiving. Stocks on Wall Street slipped after China warned it would take firm counter measures against President Trump’s decision to ratify the bill backing protesters.

On the foreign exchanges, sterling closed the month at $1.29 against the US dollar. The euro closed at €1.17 against sterling and at $1.10 against the US dollar.
Gold is currently trading at around $1,463.60 a troy ounce, a loss of 3.23% on the month, posting its biggest monthly decline of the year as investors sought clarity on the trade front. Brent crude is currently trading at around $62.42 a barrel, a gain of 03.67% on the month. Oil prices have held firm recently, on the understanding that Saudi Arabia was willing to extend the current production quota into 2020. However, oil prices fell at the end of November on rumours that OPEC’s (Organization of the Petroleum Exporting Countries) leading members are unwilling to deepen output cuts. December meetings will provide further clarity. 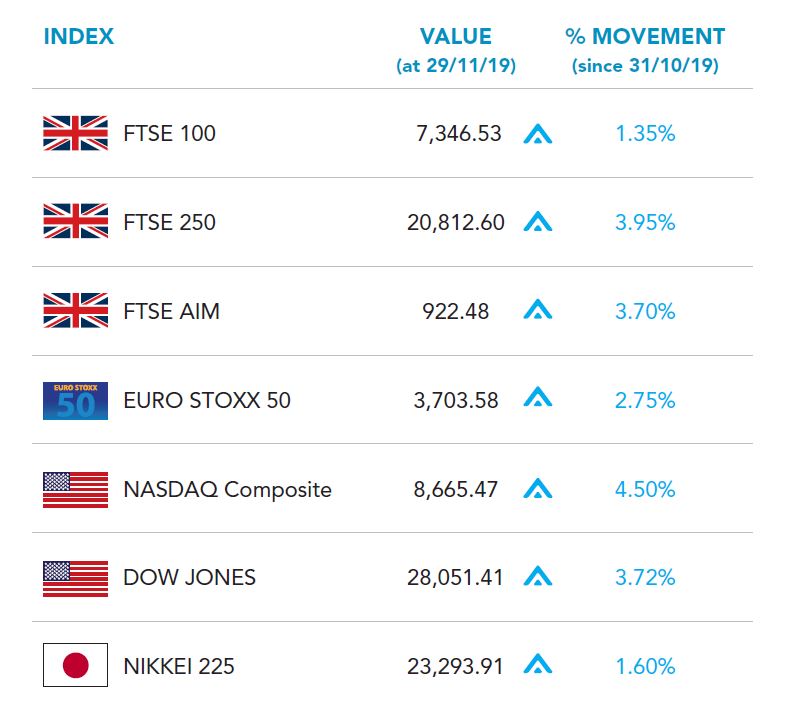 The probability of a reduction in interest rates has increased after two members of the Monetary Policy Committee (MPC) unexpectedly voted to lower the bank rate following its latest meeting.

Although the MPC did vote to maintain its existing monetary policy stance following its meeting on 7 November, two committee members did dissent, voting for a cut in rates from 0.75% to 0.5%. The two external expert members – Jonathan Haskel and Michael Saunders – argued that weakness in the economy warranted an immediate reduction and suggested there was little risk of the economy overheating if rates were cut now.

While minutes from the meeting did explicitly state that monetary policy could still respond in either direction to changes in the economic outlook, they also implied greater openness to a near-term rate reduction if an anticipated recovery requires reinforcing. In addition, they also revealed a softening in the language relating to the need for limited and gradual rate hikes in the medium term, with the text changed to ‘might’ rather than ‘would’ be necessary.

Commenting on the MPC’s decision, Mark Carney said: “These are pretty big tectonic forces operating right now. If global growth fails to stabilise or if Brexit uncertainties remain entrenched, monetary policy may need to reinforce the expected recovery in UK GDP growth. But that’s not pre-committing to anything; it’s observing the balance of risks on the forecast.”

The split decision did come as something of a surprise to economists who had been widely predicting a unanimous vote to keep rates unchanged. Indeed, the MPC’s softening policy stance has significantly increased market expectations that rates will now be cut by 0.25 percentage point at some point during the coming 12 months.

Budget deficit on the rise

The latest public sector finance statistics confirm government borrowing is on an upward trajectory even before any of the prospective election spending pledges announced by politicians have been implemented.

Figures released by ONS show that UK public sector net borrowing (the gap between the country’s overall income and expenditure) totalled £11.2 billion in October 2019. This was £2.3 billion more than in the same month last year and the highest October borrowing figure for five years.

It was also higher than all forecasts in a Reuters poll of economists and left the fiscal year-to-date borrowing total at £46.3 billion. This was £4.3 billion more than the comparable period of the 2018–19 fiscal year, and the highest April-to-October borrowing figure for two years.

The data confirms that government borrowing is now on the rise and represents a setback for the next Chancellor, whoever that may be. After almost a decade of austerity, current Chancellor Sajid Javid, previously announced the largest increase in day-to-day government spending in 15 years and both of the main political parties have committed to spending significant sums on health, schools, police and infrastructure, if they win the upcoming General Election.

This has led independent think-tank the Resolution Foundation to warn that both parties’ pledges, if enacted, would see public spending rising to levels last witnessed in the 1970s. Research Director, James Smith, commented: “The 2019 public finances deterioration provides a sobering backdrop to manifesto launches. This deterioration should be a reminder to whoever wins the election that the state of the public finances will continue to be a constraint on plans for higher public service spending or tax cuts in the next parliament.”