The latest gross domestic product (GDP) statistics showed the economy grew more strongly than expected in July, significantly easing fears that the UK was on the verge of slipping into recession.

Over the past month or so, a plethora of negative business surveys had raised serious concerns about the state of the UK economy. And, after shrinking in the second quarter of the year, a further contraction in the current quarter would result in a second successive quarter of contraction – the technical definition of a recession.

Data released by the Office for National Statistics (ONS), however, has eased those fears with the UK economy growing by 0.3% in July. This was a distinct improvement on the previous month, when the economy failed to grow at all, and significantly stronger than the 0.1% increase economists had widely been predicting.

Although the data also revealed growth across the three months to July was flat, this was actually a notable improvement compared to the previous three-month period when the economy contracted by 0.2%. While ONS did point out that the underlying picture remains weak, the better than expected July figure now suggests the UK will avoid recession this year.

Analysts also pointed out that August’s GDP data is set to receive a boost from car manufacturers who, contrary to normal practice, were operating during that month. This was due to many carmakers bringing forward their annual shutdown to March, in order to coincide with the original Brexit deadline. The fact that car manufacturers were working is expected to boost GDP by around 0.2% in August.

The Bank of England (BoE) recently updated its economic forecasts and is also predicting the UK will avoid recession; indeed, the BoE expects the economy to expand by 0.2% during the third quarter of 2019.

Weak computer game and clothing prices resulted in the headline rate of inflation slowing sharply in August, a move which appears to reduce any pressure on the BoE to tighten monetary policy in the short-term.

Data from ONS showed that the Consumer Prices Index (CPI) 12-month rate – which compares prices in the current month with the same period a year earlier – dropped to 1.7% in August. This was down from 2.1% in the previous month and marks the slowest recorded growth in prices since December 2016.

The large fall came despite a sharp decrease in the value of sterling during August and the magnitude of the drop came as a surprise to analysts. Indeed, it was the biggest monthly decline in the annual rate of inflation since late 2014.

ONS said the reduction in CPI inflation was largely driven by a significant decrease in the price of computer games and downloads. In addition, although clothing prices after the end of this year’s summer sales did rise, it was by a lower amount than had been the case in 2018.

The latest batch of inflation statistics also suggests relatively little short-term price pressures in the pipeline. This relatively benign outlook has therefore eased any pressure the strong labour market has been exerting on the BoE to raise interest rates.

Following its latest meeting on 19 September, the Monetary Policy Committee voted unanimously to keep rates on hold at 0.75% for the thirteenth month in a row. The BoE also signalled that prolonged Brexit uncertainty is likely to keep rates lower for a longer period of time, although it did once again stress that rates could move either up or down if a disorderly no-deal Brexit scenario ensues.

In September, the main global indices bounced back following losses in August. The month finished much as it began, with trade uncertainty between the US and China continuing to weigh on business and market sentiment. Markets were more optimistic after Steven Mnuchin, US Treasury Secretary announced that he and US Trade Representative Robert Lighthizer would meet with Chinese Vice Premier Liu He for trade talks in October.

In the UK, the FTSE 100 index had its best month since June, whilst the more domestically orientated FTSE 250 registered its biggest monthly gain since April. On a quarterly basis, the main UK index was marginally down, while the mid-cap index enjoyed its third consecutive quarter in positive territory.

At the end of the month, a rise in US technology stocks and better-than-expected economic data in China also helped push global equity markets higher, despite reports that Washington was considering escalating its trade war with China by delisting Chinese companies from US exchanges.

On the foreign exchanges, sterling closed the month at $1.22 against the US dollar. The euro closed at €1.12 against sterling and at $1.09 against the US dollar.
Gold prices have benefited from the Feds decision to lower interest rates, although prices did moderate toward the end of the month. Gold is currently trading at around $1,472.14 a troy ounce, a loss of 3.14% on the month. Oil prices recently experienced their biggest percentage spike in almost three decades, following attacks on Saudi Arabia’s largest oil processing plant, which effectively eliminated the world’s spare capacity. As a result, Brent Crude rose by as much as 20% to above $71 a barrel before stabilising. Brent crude is currently trading at around $60.78 a barrel. 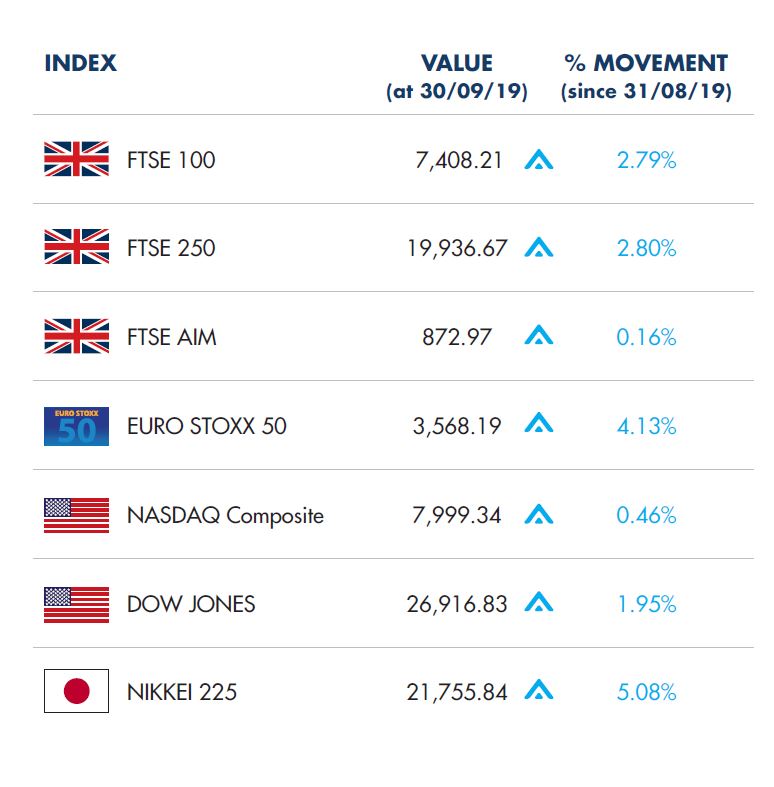 Figures released by ONS show that UK government borrowing between April and August 2019 totalled £31.2 billion. This was £6.8 billion higher than the comparable period of the 2018–19 fiscal year, which equates to a 28% increase in borrowing across the first five months of the current financial year.

In addition, ONS announced details of methodological and data changes that statisticians implemented last month. These changes specifically relate to the way ONS accounts for student debt and public-sector pensions, as well as updates to Corporation Tax data which, in combination, resulted in last year’s total borrowing figure increasing by almost £18 billion to £41 billion.

The Office for Budget Responsibility (OBR), the body in charge of government budget forecasts, estimates that these statistical changes will add at least £15 billion per year to UK government borrowing. Furthermore, the OBR has suggested this year’s public borrowing figure looks set to overshoot their forecast made in March, even without taking account of the statistical changes.

These figures clearly show that government borrowing is already on an upward trajectory even before the large spending increases announced in last month’s Spending Review take effect. In total, Mr Javid pledged an extra £13.8 billion in day-to-day spending across the 2020–21 fiscal year, declaring the government has “turned the page on austerity”.

The government’s fiscal rules currently stipulate that borrowing should be below 2% of national output. However, the updated borrowing figures suggest the Chancellor will have to relax these rules if the government is to implement its promised spending commitments without raising taxes.

The past month has again seen numerous political twists and turns in the Brexit process and as we enter the final month before the second deadline, it remains decidedly unclear how Brexit will ultimately play out.

During the past month, the government increased efforts to negotiate a new deal with several meetings held between Brexit negotiators and EU officials. However, the EU consistently insisted that no new firm proposals had been put forward and the two sides appear to remain some distance apart on several key issues.

In addition, parliament passed a law designed to stop a no-deal Brexit and was then prorogued by the government only for that suspension to be deemed unlawful following a Supreme Court ruling. The latter decision, in theory, gives parliamentarians more time to stop a no-deal Brexit although, despite the government saying it will obey the law, the Prime Minister has insisted he will not ask for another extension as the law now requires.

The government looks set to put forward new ‘concrete proposals’ aimed at reaching a deal after the Conservative Party conference and Brexit Secretary Stephen Barclay has suggested the “moment of truth” is approaching. However, even if any new proposals prove acceptable, it remains unclear whether there is enough time for a new treaty to be finalised before the summit of EU leaders on 17 October.

With the default position still that the UK will leave the EU on 31 October, a no-deal Brexit clearly remains a distinct possibility. A range of other plausible scenarios remain, though, including leaving with a new deal on 31 October; delaying departure; a General Election; or a second referendum. We may therefore, in theory, be entering the Brexit endgame but, whatever happens over the next month, it is highly unlikely to be the end of Brexit.

Investing in times of uncertainty